With a travel ban on predominately Muslim countries – though not those where the President has a financial interest – this would be a good time to revisit what Americans think of Muslims generally.

The latest survey from Pew, conducted in 2014, gives some answers about how America feels generally about this group, which makes up just under one percent of the U.S. population. Pew asked Americans to rate members of eight religious groups on a “feeling thermometer” from 0 to 100, where 0 reflects the coldest, most negative possible rating and 100 the warmest, most positive rating.

Overall, Americans rated Muslims rather coolly – an average of 40, which was comparable to the average rating they gave atheists (41). Americans view the six other religious groups mentioned in the survey (Jews, Catholics, evangelical Christians, Buddhists, Hindus and Mormons) more warmly.

Republicans and those who lean toward the Republican Party gave Muslims an average rating of 33, considerably cooler than Democrats’ rating toward Muslims (47).

Pew’s December 2015 survey about Islamic extremism showed some partisan differences as well.  It showed that Republicans also are likely than Democrats to say they are very concerned about the rise of Islamic extremism in the world (83% vs. 53%) and in the U.S. (65% vs. 38%). That survey also found that Republicans are more likely than Democrats to say that Islam is more likely than other religions to encourage violence among its believers (68% vs. 30% of Democrats) and that Muslims should be subject to more scrutiny than people of other religions (49% vs. 20%).

Overall, 61 percent of those surveyed surveyed Muslims should not be subject to additional scrutiny solely because of their religion, while U.S. adults are closely divided on the question of whether Islam is more likely than other religions to encourage violence. 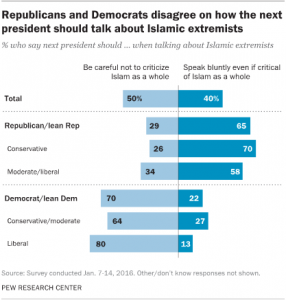 While Americans appear to be wary of Muslims, they also display some conflicting views. For example, in a January, 2016 Pew survey, about half of Americans (49%) think at least “some” U.S. Muslims are anti-American, greater than the share who say “just a few” or “none” are anti-American. But the same survey also found that most Americans (59%) believe there is a lot of discrimination against Muslims in the U.S. today, and even more (76%) say discrimination against Muslims in the U.S. is on the rise.

Nearly half of U.S. adults (47%) say they do not personally know a Muslim, while a similar share (52%) do know at least one person who is Muslim.