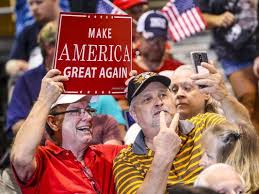 If you are one of the people who rolls their eyes when they see a juxtaposition of “Trump” and “reelection” – because he can’t run for office from jail – just take a minute and consider an alternate scenario. A scenario where not only is he not sentenced for conspiracy, but also one where a majority of Americans actually like some of his policies, whether they’ll admit it or not.

Consider this op-ed from the San Francisco Chronicle, which posits that his cruel and obviously racially motivated will not deter people from voting for him in 2020, but will make them more inclined to vote for him:

As far as Trump’s Democratic and progressive opponents are concerned, they have failed to understand that as righteous as it is to attack Trump’s positions on immigration, they are playing right into his hands by engaging him on one of the few public policy issues in which public opinion is clearly to the right of the elite consensus of both parties.

The article suggests that Americans are angry at politicians of both parties for abandoning citizens while inviting in immigrants. In other words, you’ve got to put your house in order before inviting over company. The article also centers on one key poll, and as we know with polls, it all depends on how you frame the question.

For example, there is also a recent poll showing three quarters of Americans believe immigration is a net-plus to the nation.

But it’s worth considering that just as Americans are, and have been since forever, conflicted about race, we’re also conflicted about immigration, which is, of course, tied up in race. Possibly we could take a look at what’s happening in Europe. Progressives in the U.S. were shocked that Brexit passed in 2016 – in many ways it was a precursor to the (electoral college) victory of Trump. Many English people outside London still favor Brexit, though many Londoners are horrified by it.

What if this article is correct, and there are parallels in Europe? I and many of my colleagues and friends think immigration and multiculturalism are beneficial to a country’s economy and quality of life. Others do not. The question is the relative sizes of the two sides. It’s hard to get an idea of the size of each group because we all naturally surround ourselves with people who share our views. And, it is difficult to tell how many Americans hide their true anti-immigrant feelings because they feel that their viewpoints are not acceptable outside of their political or social groups. Like I said, Americans are conflicted.

Two years is an eternity in politics. And, you know, there may be indictments coming. But leaving Trump out of the picture, I would be saddened to think that a majority of Americans are eager to scapegoat immigrants because they feel – accurately – that the middle class, even in this time of full employment, continues to fall behind. If that is the case, then it should leave an opening for a smarter and more humane politician than Trump to take on real immigration reform (not Trump’s immigration reform), and, just as importantly, some of the issues that really trouble the U.S.