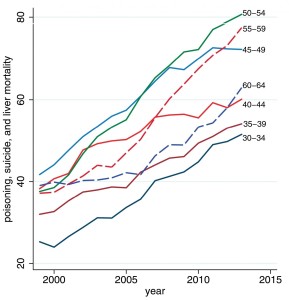 Here’s another political post, though really the interesting part is about the demographics of death in the U.S.

The immediate story is that Donald Trump’s margins of victory in the primary elections have been highest in states where the rate of deaths among middle-aged white Americans is going up. According to the Washington Post:

We’re focusing on middle-aged whites because the data show that something has gone terribly wrong with their lives. In a study last year, economists Anne Case and Angus Deaton pointed out that mortality rates for this group have actually been increasing since the ’90s.

What’s most interesting, from a demographic perspective, is why  death rates for middle-aged whites are going up. The study mentioned by the Washington Post didn’t point definitively to any causes, but the researchers suggested  that alcohol abuse, suicides and the opioid epidemic have something to do with it.

The rate of fatal “poisonings” for instance — a category that includes drug overdoses — more than tripled among middle-aged whites since 2000.

Good grief. So that Make America Great Again slogan, to some ears might be “Help Us White People Stop Dying So Fast.” Doesn’t make a great bumper sticker though.