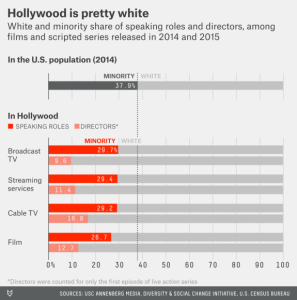 Hollywood was slammed last month after an all-white slate of actors and actresses was nominated for the Academy Awards, spawning the hashtag #OscarsSoWhite. A new study shows that, like many suspected, the lack of diversity in Hollywood goes deeper.

The study, conducted by the Media, Diversity and Social Change Initiative at the University of Southern California’s Annenberg School for Communication and Journalism, evaluated the diversity of gender, sexuality, race and ethnicity in hundreds of films and TV series released in 2014 and 2015.

It showed that nonwhite characters on-screen don’t reflect U.S. population levels. It’s even worse for professionals working behind the camera. The study also broke down its findings into categories of film, broadcast, streaming and cable, all of which are almost equally white and are often considered a training ground for the silver screen.

What we’d like to see studied are whether nonwhite moviegoers and TV watchers have noticed this and whether they have accepted seeing few people who look like them. We will share it when/if a study like that emerges.