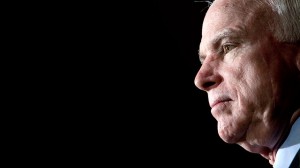 The U.S. Senate has lost one of its lions, and, predictably, the coverage of John McCain’s death ranges from hagiography to screed to everything in between.

That middle ground is most interesting. For those who aren’t familiar with McCain’s long Senate career, they’re surely aware of his 2008 Presidential run against Barack Obama. And a now-iconic moment involves pushing back against a racist woman who called Obama an Arab town hall.

McCain grabbed the microphone from her, cutting her off. “No, ma’am,” he said. “He’s a decent family man [and] citizen that just I just happen to have disagreements with on fundamental issues, and that’s what the campaign’s all about. He’s not [an Arab].”

He could have added, “and even if he were an Arab, or a Muslim, he’s still an honorable American, because Arab-Americans and Muslim-Americans can be decent family men too.” But that’s a bit of a quibble. Especially considering how toxic the political environment has become in the past decade. And considering we have an open racist in the White House now.

You may remember the Reverend Wright controversy in the 2008 campaign. That’s where video of Obama’s longtime reverend surfaced with him saying “God damn America,” but lacked the context of why Wright said this in a sermon (Wright was denouncing America’s foreign intervention and its original sin, slavery). Campaign watchers point out that in 2008 McCain declared it verboten to mention Reverend Wright or anything about Obama’s religion. He wouldn’t play the religion card. He wouldn’t play the race card. It’s the decent and statesman-like stance to take, but can you imagine that happening in a Presidential campaign today?

But McCain had other, more complex – and some might say troubling – conflicts regarding race. During his first run for the Presidency, in 2000, the Confederate flag was a controversial issue in the pivotal South Carolina primary. At first, McCain said that the flag was a symbol of “racism and slavery,” but it up to each state to determine whether to display it or not. His rival, George W. Bush, had essentially the same position, without excoriating it as a symbol of slavery and racism. McCain lost that primary to Bush, for a variety of reasons, including a smear campaign against him suggesting he had fathered a bi-racial child. After the race, he went back to South Carolina and clarified his position and apologized for putting political interests ahead of candor.

“I feared that if I answered honestly, I could not win the South Carolina primary,” the Arizona senator who named his campaign bus “The Straight Talk Express,” said at a luncheon in the state’s capital city. “So I chose to compromise my principles. I broke my promise to always tell the truth.”

His Confederate forefathers in Mississippi, McCain said, “fought on the wrong side of American history.”“I don’t believe their service, however distinguished, needs to be commemorated in a way that offends, that deeply hurts, people whose ancestors were once denied their freedom by my ancestors,” he continued.

He didn’t have to make that statement. It didn’t gain him anything. But it shows that, when political considerations are put aside, McCain was more likely to be progressive in terms of race.

But he was a Republican, running in a state with a very conservative base (Arizona). So, sometimes politics won. Like in the 2010 primary, where he was facing a challenger from the right. He responded by releasing a TV ad blaming immigrants for home invasions and saying the U.S. needed to “complete the danged fence” on the border.

This is the same man who co-authored – with another Senate lion, the liberal Ted Kennedy – a comprehensive immigration reform bill in 2005. The bill failed, scuttled by hardliners in his own party. But it remains the benchmark for immigration reform efforts, still.

We could assume that the real McCain was the bipartisan reformer he showed in the immigration bill efforts, rather than the “complete the danged fence” angry old man of 2010, at least when he didn’t have to face his base.

In 1983, as a new Congressman, he voted against making Martin Luther King Day a national holiday. Years later he said he changed his position, he evolved.

So, a complicated history. But he was willing and able to admit when he was wrong. This is something that stands in stark contrast to his party today, and the leader of his party.