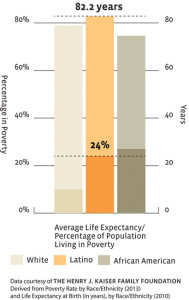 Despite nearly a quarter of U.S. Latinos living in poverty, the group as a whole has a higher average life expectancies than white Americans, who have a much lower poverty rate.

This article from Yes magazine has some theories as to why. It’s about Latino traditions of food, community and family bonds.

Author Claudia Kolker took a closer look at such cultural practices for her 2011 book, The Immigrant Advantage. Her book examines why immigrants are often healthier than native-born Americans—a question that continues to be explored. Some credit this perplexing phenomenon to the idea that immigrants must be healthy to migrate. Kolker’s research shows its connection to customs like Danza Azteca: close community bonds, traditional foods, and la cuarentena, a Latin American tradition in which a new mother rests for the first 40 days after giving birth, not lifting a finger except to breastfeed and bond with her child. Kolker also has a hunch that a lack of smoking is a factor, and other researchers agree.

But here’s another paradox. The healthier living advantage is primarily for recent immigrants.

Timothy Smith, a psychology professor at Brigham Young University, also has studied this scientific wonder and suggests that social bonds and culture do contribute to health. While more research is needed to know for sure, one thing is certain: American assimilation isn’t exactly healthy. “They’re adopting the local culture, which does have some adverse consequences,” he says. “There are positive consequences to health and adverse consequences.”

Read more about the paradox here.