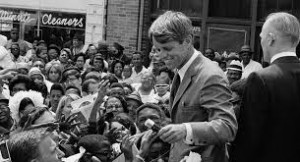 Tuesday was the 50th anniversary of the assassination of Robert Kennedy in Los Angeles, minutes after he was projected to win the California primary and was – maybe, we’ll never know – on a path to securing the Democratic nomination for President. It’s just anecdotal, but in my experience, people who were alive and aware at that time, and who were Kennedy supporters, still tear up when they speak of him. Even more so than the reaction of those who remember where they were when his brother, JFK, was killed. They believe that hope was killed on that June day in 1968.

There’s an excellent documentary on Netflix right now, “Bobby Kennedy for President,” which chronicles RFK’s awakening to racial issues of the 60s. The film makes note that he started off that decade as his brother’s Attorney General, wiretapping Martin Luther King and being highly resistant to making overtures to communities of color. Near the end of the decade, and his life, he strongly embraced Black and Latino communities. We can credit Martin Luther King and other civil rights leaders for his change of heart. But whether it was political calculation or a sincere evolution – many historians come down on the latter – he was the first politician running for President to not ignore communities of color or at least pay them lip service. Historian Richard Kahlenberg superb has written an excellent paper, “The Inclusive Populism of Robert Kennedy,” making the case that RFK was building an alliance of working-class whites and minorities, a coalition that just might have won.

Fast forward to 2018. Where are working class whites now? Oh yes. They helped propel Donald “Mexicans are rapists” Trump to the White House.

Remember when Presidents of both parties, at least in words, tried to appeal to our better natures? What happened? Was a half-century of progress wiped out with one divisive campaign and one highly divisive and bigoted President. Yes, some of it, at least, we can hope, temporarily.

A recent Washington Post editorial stated that everything we’ve witnessed recently, from the ugly Roseanne tweet that ended her show, to the rise in open racists running for office, are predictable and predicted byproducts of the hate spewed from the resident of the Oval Office:

Can I prove that Trump’s hate-mongering is infecting the culture? No, I can’t, but it stands to reason — and there are signs that it is. This year, there are at least 10 white supremacists running for office — and that doesn’t count failed West Virginia Senate candidate Don Blankenship, who excoriated “China people,” and failed Georgia gubernatorial candidate Michael Williams, who campaigned in a “deportation bus.” Organizations such as the Anti-Defamation League, the Center for the Study of Hate and Extremism, and the Southern Poverty Law Center report that the number of hate crimes and hate groups has increased since Trump became president.

I can’t prove that the rise in overt racism is a direct result of Trump’s hate-mongering. But if not that, then what has precipitated it’s ugly rise?

I think reasonable people can agree on a few things. Racism never really left the U.S. It’s just that many racists and bigots were, for a while, afraid to say what they really thought. During that shining illusory interregnum in blatant racism –how quaint the term post-racial society sounds – people with racial animus – as opposed to racial bias, which, sadly affects a much wider swath of America – became resentful about feeling like they had to moderate their views. What was happening was, they were keeping the views out of sight, but within their bubbles, they were free to not only say what they wanted, their sense of white victimization grew. Hey, bubbles reinforce beliefs, don’t they?

Speaking of bubbles, we all live in our own. Here in southern California, a melting pot, salad, whatever metaphor you want to use, of every race, bigotry is generally not cool. Because I live in this region, which is relatively free of overt racism – oh it’s likely there, but tamped down by social norms – I’m left astounded and a little depressed every time I see support for Muslim travel bans, racist rallies, and polls where whites say they’re victims of discrimination.

And now, here we are, in a time where racism, for the time being in at least in a too-large part of the population, is normalized again. We’re a much more diverse nation than 50 years ago, and on the verge of, as you’re probably aware, of becoming a nation where whites are not the majority. And yet, we have an occupant in the White House who has, time and again, shown more racial animus than any major candidate for President since George Wallace, a man who doesn’t use coded dog-whistle terms to speak to racists, but rather, a bullhorn. It should be noted that George “Segregation Forever” Wallace didn’t come close to winning any of his Presidential races. Pendulums swing back and forth. We may be seeing a certain percentage of the white population unleashed and angry that they’ve had to keep their racism under wraps for so long. But it’s pretty clear that Trump gave them the freedom to unwrap it.

Still, America is changing, and it will not become whiter. I fear that America will always have a problem with race. But with more time, and with leaders who, at the very least, accept that this is a multicultural nation, we’ll keep making progress.

While I’m on the RFK-Trump comparison, one more thing. Charles Blow, opinion columnist in the New York Times, has an excellent piece today outlining what he sees as the darkness in Trump, and concludes:

He always disguises his hatred, often as a veneration and defense of his base, the flag, law enforcement or the military. He hijacks their valor to advance his personal hatred.

So I remember that. I center that. I hear “I want to hate” every time I hear him speak. And I draw strength from the fact that I’m not fighting for or against a political party; I’m fighting hatred itself, as personified by the man who occupies the presidency. That is my spine stiffener.

Surely RFK had his detractors. But I seriously doubt anyone made the case fifty years ago that he was a “hater.” Maybe that’s why he’s still beloved by so many who were adults at the time. And I’m trying not to be mean here, but I can’ help wondering how many people get weepy at the memory of Gov. George Wallace, who, to be fair, recanted on much of his racial animosity at the end of his life. And I can’t help wondering, after all the ways Trump has taken us backward into bigotry, after he’s gone, how many people will choke up at the memory of him?