Still okay to make Asians the butt of jokes? 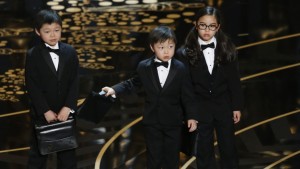 For those who watched the Oscars last Sunday you were treated to a skit where he introduced the “dedicated, accurate and hard-working” accountants “Ming Zhu, Bao Ling and David Moskowitz.” They were responsible for counting the votes for the night. He then welcomed the three tuxedo-clad kids, Kung included, holding briefcases. The funny part was that Asian (and Jewish Americans are model minorities who are good at math. Rock also threw in a child labor reference: “If anybody is upset about this joke, just tweet about it on your phone, which was also made by these kids.”

Haha. Joking about child labor in Asia, which is a real thing.

The jokes fell flat. The irony is, Rock was on fire for his justifiable skewering of Hollywood excluding black talent not only from awards but from key roles.

Guess what? There aren’t very many roles for Asian actors in film either.

But about the skit. Is it still all right to make fun of Asian (and Jewish) Americans as the hardworking model minorities? Who doesn’t want to be known as hardworking and dedicated and good at numbers, right?

Well, certainly not when the butt of the joke is a real person, a kid who wasn’t in on the joke. Public Radio International has more about that:

The joke stung harder than it might have in years past, precisely because the trending hashtag #OscarsSoWhite, which emerged because it was the second year in a row where all the acting nominees were white, forced Rock and the Hollywood elite to confront their biases. Prior to the ceremony, celebrities including Spike Lee, Will Smith and Jada Pinkett Smith boycotted the awards show. Directors Ava DuVernay and Ryan Coogler chose to hold #JusticeForFlint, a fundraiser for the Flint water crisis, on the same night. Academy president Cheryl Boone Isaacs announced its goal to double its diverse members by 2020.

So when Asians still seemed to be the butt of the joke — it didn’t help that presenter Sacha Baron Cohen would later make a joke about “hard-working little yellow people with tiny dongs” — even celebrities like Constance Wu, Daniel Dae Kim and Jeremy Lin weighed in on Twitter.

Let’s imagine an Asian version of Chris Rock – Margaret Cho comes to mind – hosting the Oscars. Hard to imagine her green lighting a skit where African Americans are the butt of the joke.