Study: many whites voted for Trump for his embrace of whiteness 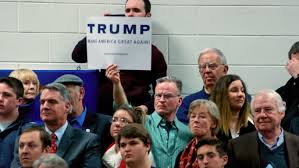 For the past year and a half, there’s been a vigorous, sometimes tortured, effort to answer the question of how the election of Trump happened. Let’s forget for a minute that Hillary Clinton actually won 3 million more votes. She’s not sitting in the oval office.

It’s been posited that it was economic anxiety among rust belt voters that led so many Ohioans, Michiganders, Wisconsinites and Pennsylvanians to vote for Trump and deliver him an electoral college victory. The theory goes, he’ll bring back jobs by… doing something. Like tariffs, which he’s done. And… doing deals (he never was very specific about how he was going to bring back jobs, was he?)

We’ve also been told that voters wanted a change in Washington, drain the swamp as it were. Try not to laugh, given what you know about the D.C. swamp, which has become a nationally protected wetland with extra alligators since January, 2017. But maybe some people did believe that Crooked Hillary line. Surely many people just hate Washington, and having some other guy in there – a businessman, sports figure, singer, whatever – would do the nation good.

What a lot of mainstream pundits have tap danced around is what many of us have suspected: many whites voted for Trump because of his pretty explicit embrace of white nationalism.

Well, now there’s a study that backs up what we’ve been thinking. A new study, published in Proceedings of the National Academy of Sciences, shows that a segment – though not all, but hey, he only lost three key states by 80,000 votes – were motivated to protect their own dominant status in American culture and politics. Make America Great Again, for some, meant Make America White Again.

The study looked at a group of the same voters who cast ballots in 2012 and 2016, focusing on those who voted for Barack Obama in 2012 and Trump in 2016. Many of these voters, instead of expressing pocketbook fears, showed deep concern about America’s declining global power and – this is key – about the projected demographic changes that will put whites out of the majority by 2045.

The study’s author, Diana Muntz, a professor of political science at the University of Pennsylvania, found that one factor in particular increased the likelihood of voting for Trump: the belief that white people are more discriminated against than people of color. Mutz also found that the people who switched their vote from Democrat to Republican liked Trump’s aggressive stance on free trade and China’s ascendance as a global superpower. And they wanted group hierarchy, not equality, with their group on top.

So, remember that escalator speech where Trump announced his candidacy, the one where he said Mexicans coming into the country were rapists and murders? Turns out he knew his base pretty well. Or, maybe, he created this base. After all, no major nominee of any party has been so openly bigoted.

Now that naked bigotry is out in the open – and, sadly, growing – how do we as a nation deal with what has been unleashed? It’s a pretty good time for a real conversation on race. Unfortunately the one with the biggest megaphone and tiniest twitter fingers is the one setting the agenda. For now.