How would it look if there were more Asian actors playing lead roles in Hollywood blockbusters? 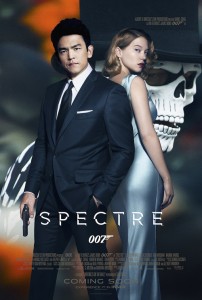 You may have seen actor John Cho in the Harold and Kumar comedies (he’s the uptight Harold who’s friends with the stoner Kumar). But have you wondered what John Cho would look like in bigger mainstream action movies? Check out the #StarringJohnCho website. A 25-year-old digital strategist William Yu, who’s Korean, Photoshopped Cho onto a collection of mainstream movie posters to draw attention to the fact that, as he says on the site, “whitewashing Asian roles in film abounds.”

On this blog we’ve pointed out the common practice for white stars to be cast as Asian characters, such as Scarlett Johansson playing Motoko Kusanagi in the dystopian crime story Ghost in the Shell, blonde and blue-eyed Emma Stone as Alison Ng in Aloha. Asian actors generally remain consigned to bit roles.

Cho is not affiliated with the website, but Yu did say on PRI’s radio show “The World” that Cho gave him an emoji heart.