Why not Straight Pride? Here’s why 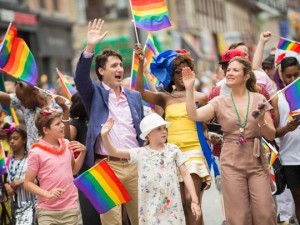 June is officially LGBTQ Pride month, but you wouldn’t know it from the radio silence on the matter, two years running, from the White House. It’s been celebrated every year in June since 1970 after the 1969 Stonewall riots in New York.

There has been a tremendous amount of progress in the U.S. on LGBTQ rights in my lifetime. Heck, even in the last five years, despite, of course, the retrograde attitude of the White House.  Younger people, Millennials and Gen Z’s, are less likely to identify as gay or lesbian. And not because they’re closeted, as was the case back in the day. It’s because, thanks to the rights being won for LGBTQs and the idea among this cohort that sexuality is no big deal, therefore why claim to be anything?

But I don’t think we’re in a post-gay world – remember the post-racial world we had apparently entered a decade ago? And I don’t think that Pride parades are a relic of the past. Not yet. And neither does this op ed writer for USA Today.

Never has a person lost their job for being white or straight in North America, or been denied an apartment for being white and straight, or been leered at or attacked by strangers for simply holding hands with their significant others. There is a level of social and systemic privilege not afforded to many members of the LGBTQ community in North America, and certainly in many countries around the world…

Living proudly and openly in societies where your well-being (emotional, physical, professional) is constantly at risk is nothing short of brave. The fact that we are seeing more people live openly and honestly despite these challenges is a miracle.

Almost every day, we see threats made against members of the LGBTQ community. The scaling back of hard-earned rights and protections of LGBTQ people, particularly transgender people, is difficult to ignore.

Quite true. So we can scoff at Pride parades as being commodified by corporations. And there’s some truth to that. But remember when it was a big win when the first corporations co-sponsored Pride events? I do. It wasn’t all that long ago.

Rights are granted, and they can be taken away. I think it’s not a bad idea to remember that and celebrate them. And for the young or not so young LGBTQ person to find others like him/herself, proudly marching, it can be a transcendent experience.

Next time someone sneers and suggests a Straight Pride month, feel free to roll your eyes. Or, feel free to politely educate the people suggesting this. See also: Why Black Lives Matter – Why Not All Lives Matter.