“You will not replace us!” 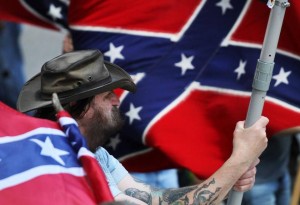 On Saturday, several dozen torch-wielding protesters gathered in Charlottesville’s Lee Park chanting “You will not replace us,” “Russia is our friend” and “Blood and soil.” It was a short protest, quickly dispersed.

It was a response to the Charlottesville City Council, which in April voted to sell the statue of Confederate Gen. Robert E. Lee that stands in the park. A judge earlier this month issued an injunction that prevents the city from doing so for six months. It’s part of a – well, movement is too sweeping a term – concurrent effort to remove Confederate monuments from public spaces throughout the south.

It’s hard to say how representative the protesters are of white Southerners today. The removal of the confederate flag from South Carolina in 2015 after Dylan Roof massacred black people in a Charleston church. Yet the fight over the flag hasn’t ended.

It’s easy for many to day, “you lost the Civil War, get over it already.” But to some – okay many, even most – Americans who see Civil War symbols as a reminder of slavery, to some, they’re something else (but don’t call these people racists). In banning the Confederate flag in 2015, South Carolina Governor Nikki Haley said that it could be displayed, but in a museum. Many others equated it with Nazi symbols, something you just don’t wear in public. Then again, one wonders how many people have both swastikas and Confederate flags in that venn diagram of white supremacist groups.

Right, we’re not supposed to call those who want to preserve Confederate symbols in public places racists. Just historians. Okay then. We’re actually not interested in debating that. What we do find interesting is this: the Charlottesville protesters chanted “you will not replace us!”

White Americans – north, south, east and west – are very touchy these days. In study after study, the idea that white people were losing ground – economically and culturally – was a main reason they voted for Trump.

Now, the latest research offers more evidence that it was fear of diversity – okay let’s just call it racism, mixed with xenophobia – that motivated Trump voters:

Sixty-eight percent of respondents to the PRRI analysis said they believed the U.S. was in danger of losing its cultural identity. Similarly, 65 percent responded that American culture had deteriorated since the 1950s. And more than half of white working-class Americans said that discrimination against whites was as big a problem as discrimination facing blacks and other minorities.

Discrimination against whites. So, we’re at a chicken-or-egg question. Did Trump stoke the fears that were already there, making white pride a thing? Or did he funnel all of the fears of white Americans into one convenient container: race?

You will not replace us: those projections that the U.S. will be racially plural in this century really, really have struck at the heart of white America.